The musical director, Robert Webb, began the concert with one of the glories of the music for this season, The Reproaches by John Sanders. The narrative is set to a simple chant with rich harmonies in the refrain. The gentleman of the chorus performed the plainsong with strong tone and excellent diction. The crunching chords were well negotiated by the choir. This was followed by Bob Chilcott’s beautiful anthem, much beloved of church choirs, Be Thou My Vision. The tenor soloist, instead of a usual soprano, sang the solo line; this worked very well, with sensitive accompaniment from the choir. 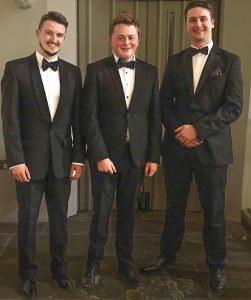 Stainer’s The Crucfixion, a cantata for Passiontide, was written in 1887. Stainer’s intention was that it be within the scope of most parish choirs. The structure is modelled on the scheme of choruses, chorales, recitatives and arias from Bach’s St Matthew Passion. The tenor soloist, Ed Lambert, expressively set the scene in the Garden of Gethsemane, followed by the rich deep tones of the bass soloist, Jonty Ward, in ‘The Agony’. The chorus accompanied this without looking at their score and their attention on the conductor and audience gave a powerful and dramatic intensity to their opening entry. They then robustly ‘Flung wide the Gates’ but lost a little clarity of diction towards the end of this chorus. The two soloists balanced each other well. Ed Lambert sang with great clarity and emotion, and Jonty Ward was authoritative but his diction was occasionally unclear. Simon Watson, who is to be the Society’s new accompanist, supported well with his solo vocal contribution. The singing of the chorus in the much loved, ’God so loved the world’, was sublime. The last chorus sung by the gentlemen of the chorus and the tenor soloist concludes with the words ’and he bowed his head and gave up the ghost’, and was profoundly moving. 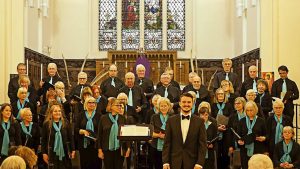 The work includes five hymns intended for congregational participation. Unfortunately they were only performed by the chorus on this occasion. The Crucifixion is one of the few works where the congregation is invited to become part of the performance; presumably once again Covid concerns spoilt our fun.

The chorus and soloists were sympathetically supported by the organ and the piano accompaniments played by Charlie Dobson.

Robert Webb, the musical director, has a sensitive and deep rapport with the chorus. His meticulous preparation is patently obvious and the choice of programme items was thoughtful. The members of the choir obviously relished their participation. This was a joyous concert, even though the subject matter was the death of Christ. We were sent home following a joyful rendition of Hubert Parry’s 1902 anthem, I Was Glad’ written for the coronation of King Edward V11 V and sung at every coronation since.